Cádiz is an old port city in the southwest of Spain, built on a strip of land surrounded by sea in the region of Andalusia. The port is home to the Spanish Navy and grew in the 16th century as a base for exploration and commerce. It has more than 100 watchtowers, including the iconic Tavira Tower, traditionally used to spot ships, and the Cathedral of Cadiz from the 18th century, on the coast. 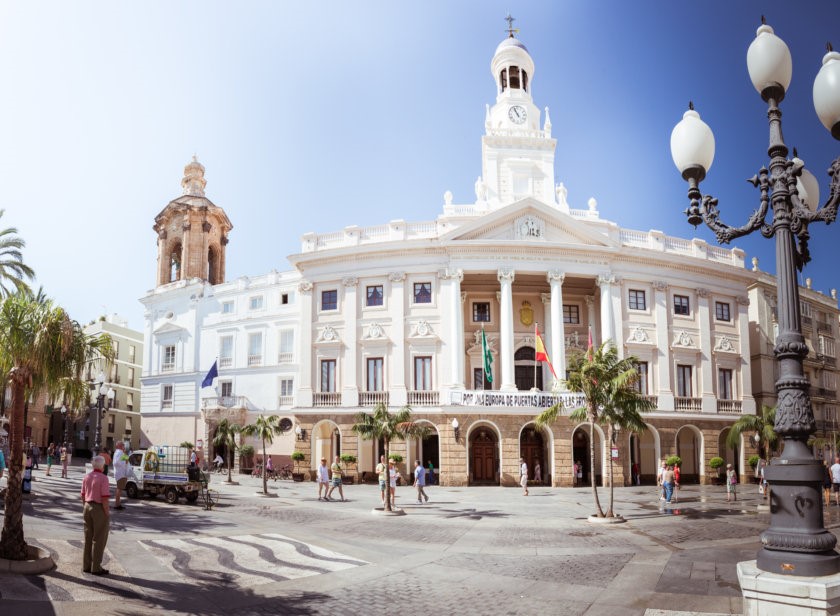 El Teatro Romano
From San Juan de Dios street, go to the Roman Theater of Cádiz.
Dated at the end of the 1st century BC, it was discovered by chance in 1980. It is the oldest in Spain and one of the largest, with capacity for 20,000 people. Today, the proximity of the surrounding buildings prevents further excavations.
Feel free to enter, the visit to the museum and the theater is free. It is small, but I loved the way the tour is organized, you can even walk in an underground corridor under the stands. 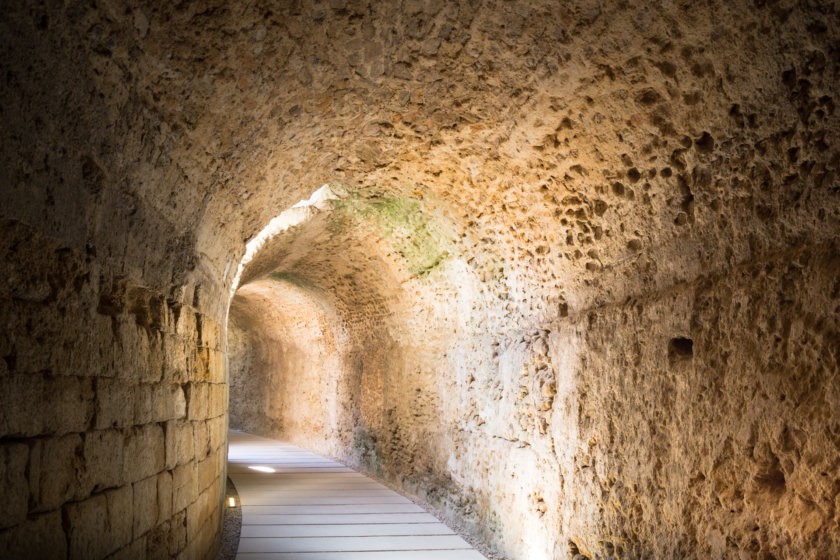 Catedral de Cádiz
With its golden dome, the most famous monument in Cádiz can be seen from everywhere while walking through the city. Started in 1722, the construction of the Cathedral of Cádiz was completed only a century later and thus mixed several architectural styles such as Baroque and Neoclassical.
The Cathedral, located in the historic center, was nicknamed ‘New Cathedral’ by the locals, as opposed to the ‘Old Cathedral.’ The Old Cathedral is also known as the Church of Santa Maria, which, you guessed, was the old cathedral.
So, in addition to the cathedral, do not hesitate to visit the Church of Santa María. It is close and admission is free.
During your visit to the new Cathedral, you should definitely go up to the Torre de Poniente, one of the bell towers of the Cathedral. Once at the top, you can enjoy a beautiful panoramic view of the entire city. The view from above is particularly impressive! 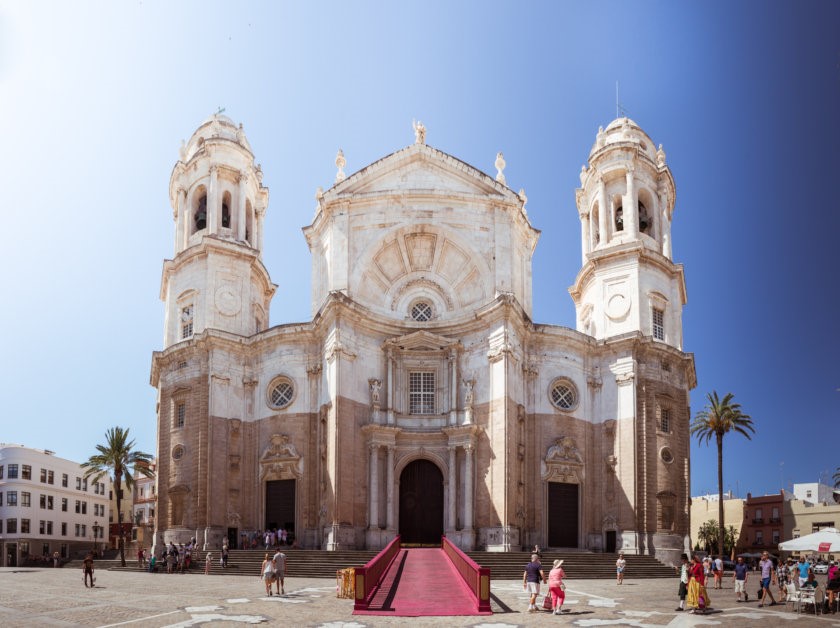 Mercado de Cádiz
After the cathedral, you must walk to the Cádiz market. For me, going to the market is a necessity when it comes to discovering a city or region. The best way to discover local products!
To go there, take Calle Compania to the Plaza de las Flores (named for the many flower stands you’ll find there).
Then you will arrive at Plaza Libertad and its central market. Unlike other Andalusian markets, it is not super large, but enough to taste some fresh produce from the land. It is your best option if you want a good sandwich of cold cuts and cheese! 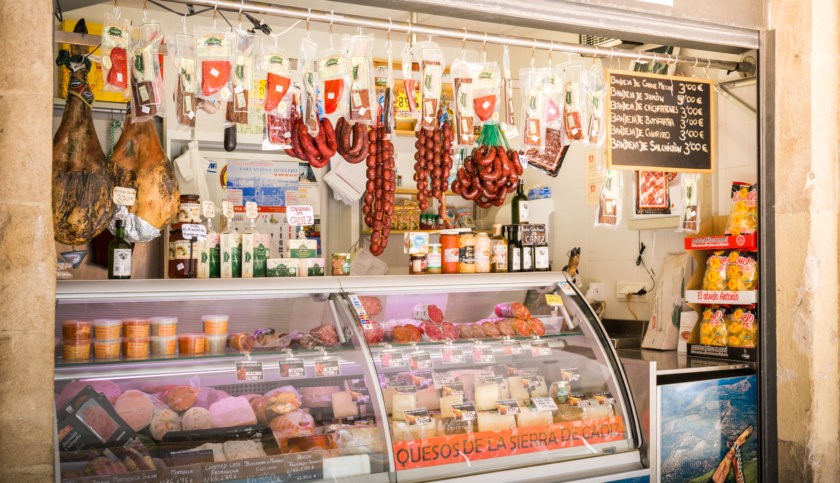 La Torre Tavira
Near the market, first on Alcalá Galiano Street and then turning left on Sacramento Street, is the Tavira Tower, one of the 126 towers (yes, only!) Of Cádiz. It is one of the most visited buildings after the Cathedral.
These towers generally served as watchtowers for the port, and the Tavira Tower was the tallest and main. The main attraction of the tower is the Dark Chamber, a room equipped with a set of optical lenses and mirrors: it allows you to admire the entire bay of Cádiz in a magnificent panorama.
In the Tavira tower there are also exhibition halls and audiovisual projections.

Castillo de San Sebastián
Your walk through the Campo del Sur will take you directly to the entrance of the Fernando Quinones promenade, the path that leads to the castle.
Connected to the city by this pier, San Sebastián Castle is located on a small island. The legend says that this is where the temple of Cronos was, in ancient times. It was the Venetians who called him ‘San Sebastian’, to invoke his protection.
A little history: in the fifteenth century, sailors on a Venetian ship contaminated by the plague epidemic were allowed to settle there and build a hermitage.
A watchtower was then erected to counter any attack. Then, in 1706, the castle was built to reinforce the city’s defenses.
Today, the castle of San Sebastián is the opportunity to take a beautiful walk along the ocean and admire a great view of the promenade of Cádiz. Inside you will have access to free exhibitions. Concerts and other events are often held in the courtyard. The castle is world famous for having served as a filming location for a James Bond movie: ‘Die Another Day.’ 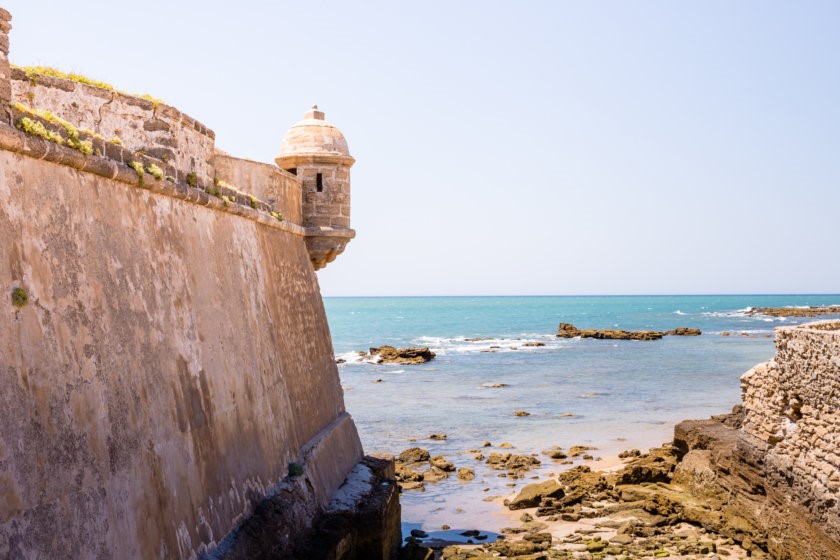 Playa La Caleta
Between the two castles of Cádiz, La Caleta beach is the perfect stop for swimming and cooling off. However, it is relatively small and is in the historic center, so in summer, it can be a bit crowded!
You will find all the comforts: restaurant, bar, toilets, showers. It is a guarded beach, and the two castles form a breakwater that protects it from strong waves.
The small fishing boats moored next to it give it a real charm. 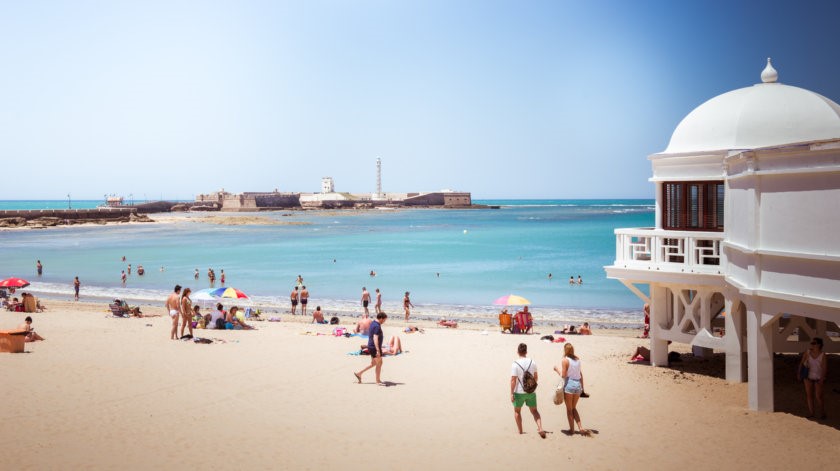 Castillo de Santa Catalina
Located at the other end of the Caleta beach, this fortress was part of the city’s defense infrastructures.
After the looting of Cádiz by Anglo-Dutch troops, the king of Spain decided to build the fortress to reinforce one of the most vulnerable points in the city.
The building is star-shaped, with several defensive bulwarks. The parade ground is surrounded by different pavilions and a chapel dedicated to Santa Catalina.
The Castle of Santa Catalina can be visited and hosts several art and painting exhibitions. It is also a great viewpoint: simply walking along the walls and enjoying the view of Caleta beach and the fortress of San Sebastián is very nice! 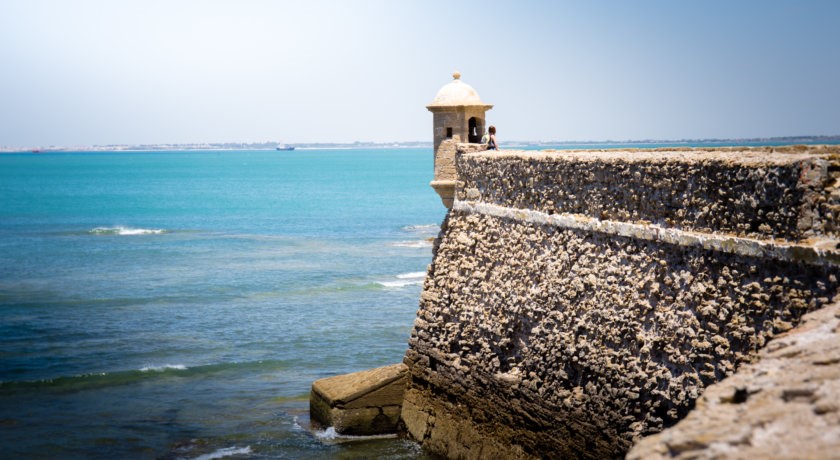 Castillo de Baños de la Encina.
In the town of the same name, Is this architectural work, also known as Burgalimar Castle, a name that comes from the Arabic Bury al-Hamma, ‘Castle of the Baths.’ The fortress of the 10th century, surrounded by 15 towers imposes the visitor for its beauty and conservation status. 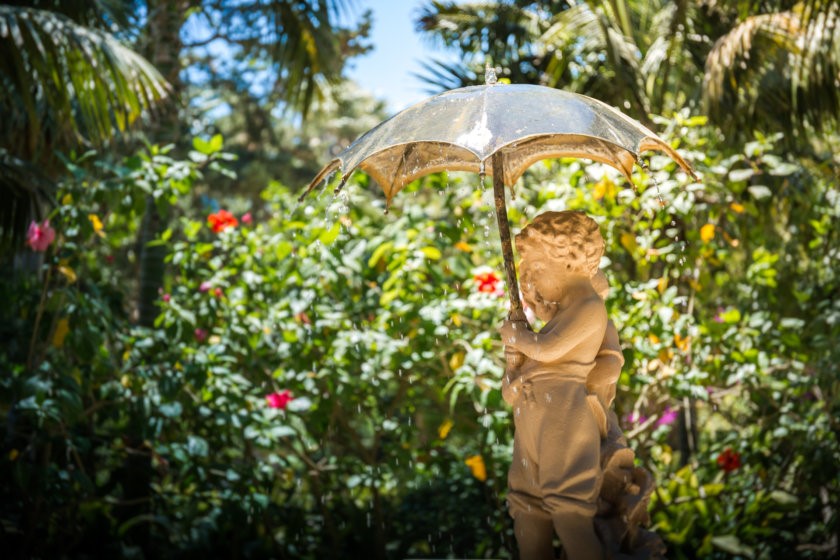 Parque Alameda Apodaca
If you want to enjoy the freshness of the gardens a little more, you should go to the Alameda Apodaca park. It is very easy to find, since you just have to walk along the sea.
With its many trees, fountains, wrought iron lanterns, sculptures, colorful ceramic benches and chessboard tiles, it is for me the most beautiful park in the city.
I did not have the opportunity to see it, but it seems that the park is particularly beautiful at sunset. 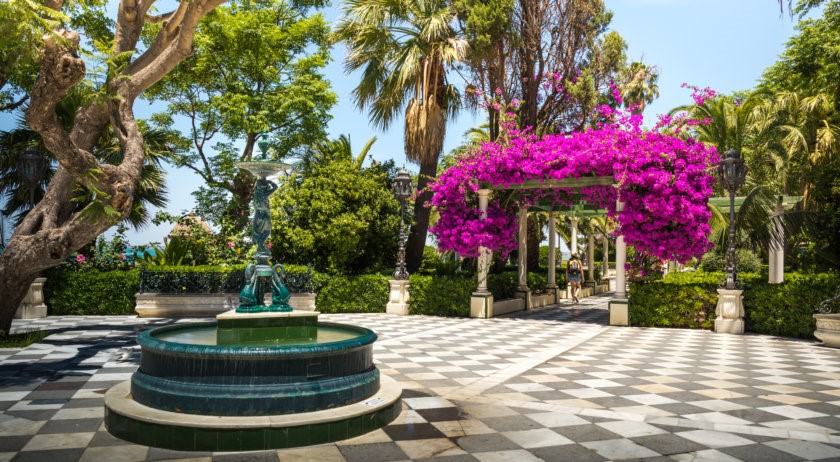 The monument was built in 1912 to commemorate the centenary of the Spanish Constitution. Yes, you may not know it, but it was signed in Cádiz in 1812!
This monument is very symbolic. The lower part represents a semicircle and an empty presidential chair. Several silhouettes contain texts of the constitution and on the sides, horse figures symbolize peace and war.
Several themes also evoke agriculture and citizenship. 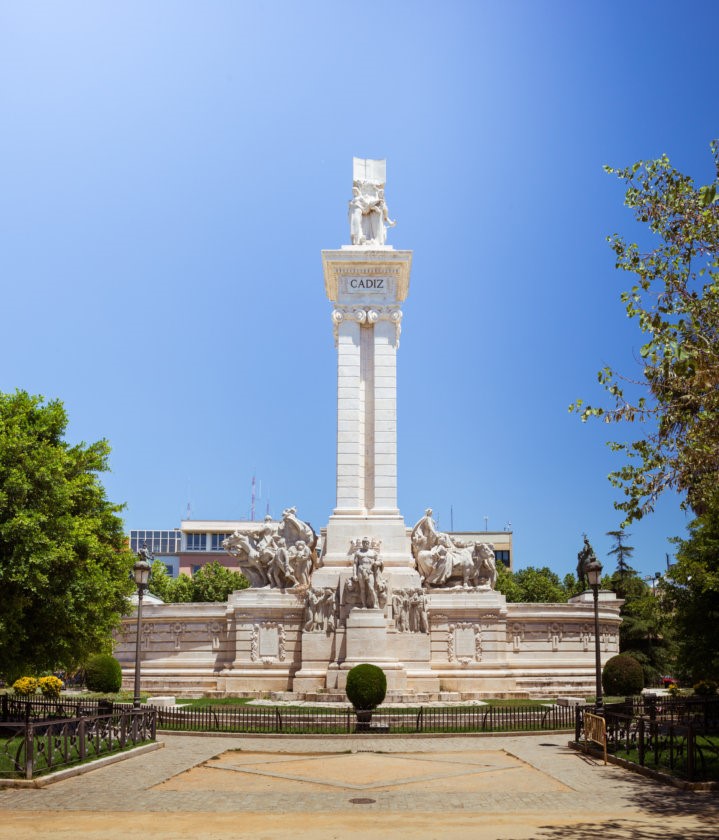